Maccabi Ukraine held a series of seminars devoted to the promotion of the initiative of the European Maccabi Confederation (EMC) – MACCABI FUN RUN, which annually brings together various Jewish organizations and communities around the world. This is a day of community and charity events, which is held by the EMC and its territorial organizations. 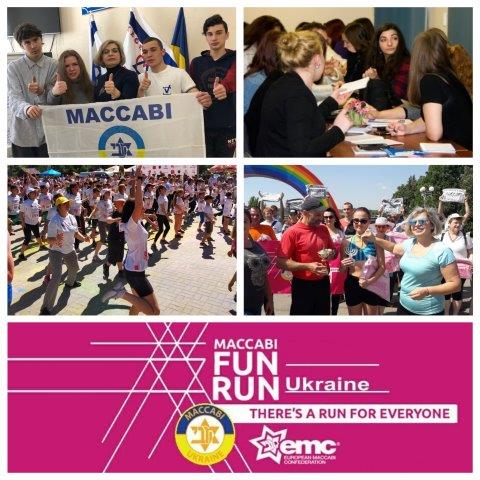 Fun Run is a fun sports marathon for everyone, regardless of your age and sports level. Various routes are offered for the race, to make each participant feel comfortable.

The Fun Run support team operates on a volunteer basis and provides professional support and guidance to local organizers. For the first time this event was organized by Maccabi GB and was held only in London. Then the model was successfully implemented in Budapest, Hungary and then in other countries.

Since the creation of the support team, there has been an impressive development of the project. In 2016, the event took place in 7 cities, in 2017 – in 16 cities, and in 2018 – in 18 cities. As this project gained more and more popularity in Europe, other Maccabi confederations began to implement this idea in their communities.

Ukraine joined the project in 2017. For the first time, 3 cities took part in it. In 2018, the event took place already in 4 cities (Kharkov, Kiev, Odessa and Zaporozhey). The number of cities and the number of participants (500 people) speak for themselves.

In 2019, the MACCABI FUN RUN is already being prepared in Kharkov, Zaporozhye, Kherson, Odessa, Kiev and Berdyansk.