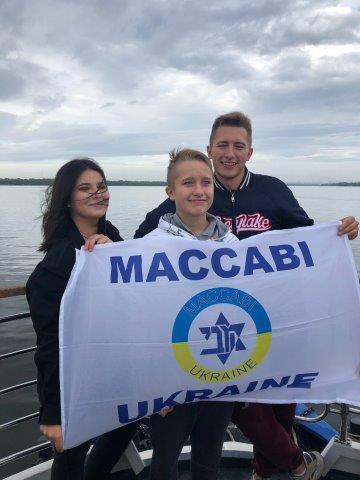 What a holiday without guests? Zaporozhye is an interethnic city, and the celebration was attended by: the head of the center of national cultures “Suzir’ya” in Zaporozhye regional scientific library – Olga Nazarenko, the head of the Zaporozhye Center for Tatar culture “Altyn Ai” – Ryakhima Akhmerova, the chairman of the board of the public organization “Zaporozhye Roma centre “Lacho Drome”- Aleksey Padchenko, representative of the public organization” Zaporozhye City Georgian Society named after Shota Rustaveli ”and the head of the Georgian dance ensemble“ Imedi ”- Malkhaz Chakhvashvili, the Ukrainian society “Chumatsky Shlyakh”- Tatiana Dudka and Yevgeniy Zhavoronkov, representatives of the Zaporozhye city association of Germans“ Wiedergeburt ”- Marina Fon-Otto.

Rosh Hashanah is nearly, at this time it is usual to take stock, make plans for the future. The participants of the event talked about their plans for the next year, received knowledges, participated in master classes, created a prayer for Peace, listened to the shofar, shared recipes for challah, sang songs.

It is also important that by introducing participants to the values of Jewish culture, we learned the traditions of other peoples, and strengthened interethnic ties. After all, the basis of Jewish values is mutual understanding and respect for other nationalities.

Representatives of more than 130 nationalities live in Zaporozhye in peace and harmony. Maccabi hosts a large number of events here, which also contribute to the strengthening of interethnic ties. Among them there are such as – “Doors open days”, tournaments in rhythmic gymnastics and mini-football among the diasporas. Interacting with representatives of other peoples, we preserve our traditions and remain Jews.