From 8 to 15 August, 25 Maccabi volunteers from all over Ukraine took part in the educational, volunteer project “Heritage – 5781″ focused on study, preservation and restoration of the Jewish heritage. 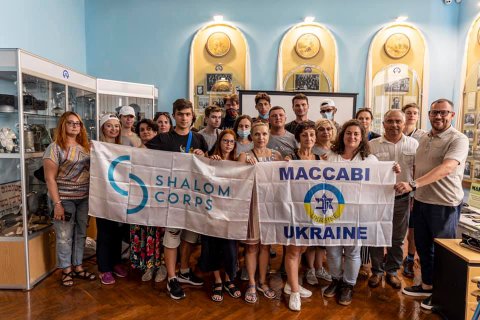 Thanks to the invaluable support of Shalom Corps, the World Maccabi Union and Maccabi Europe, our volunteers have got to see firsthand the Jewish places where things have been hamming for hundreds of years, to discover the history of the cities of origins of million Jews who now resided around the world, to feel the inspiration for Jewish artists, writers and poets, to study the material evidence of an era that was irretrievably burned down in the fire of the Holocaust. We got acquainted with the Jewish heritage of Lvov and Chernivtsi.

The main goal of our project was the preservation of our history, do not forget it and involve young people in the problems of preserving the Jewish cultural heritage, the formation of their historical and national identity, a sense of responsibility for the preservation of cultural values.

During our gathering in Lviv, Elena Kolb, European Jewish Cemetery Specialist, gave a training session about the Jewish heritage of the region, told the history of the local cemetery and the techniques of reading Jewish epitaphs. 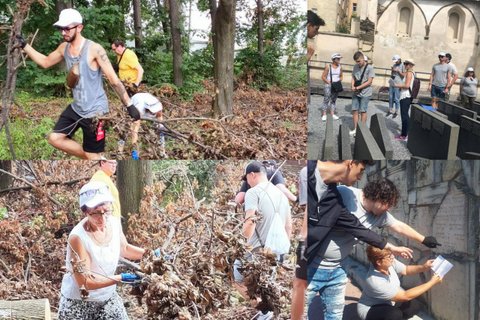 In order to comply with the safety measure of participants in the conditions of COVID, the project was conducted mostly outdoors, as the participants received the main points of theoretical information at the preparatory training webinars.

Nata Tolok easily and fascinatingly introduced participants to the Jewish places of Lviv. Of course, one day of research and excursions is not enough for Jewish Lviv. The most important Volunteer Community, Sasha Nazar, told about global volunteer projects. Maccabists cleared the remains of the found matzevah from the impact of the past hurricane. We visited the synagogue “Yakob Glanzer Shul”, where Sasha is fighting against time and trying to save her. We helped to deal with the garbage, and we were lucky to be one of the first to see the excavation of a recently discovered ancient mikvah. 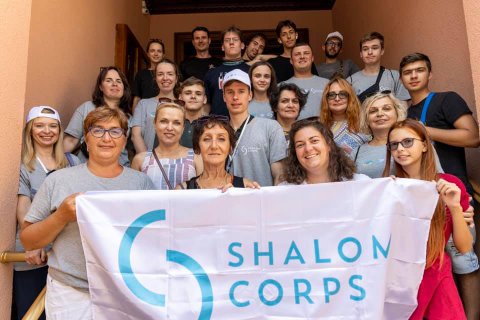 On the way to Chernivtsi, we got acquainted with the Jewish history of Ivano-Frankivsk and Kolomyia. Buchach is the small homeland of the great writer, Nobel Prize winner Shmuel Yosef Agnon, the city that inspired him throughout his entire work, and which keeps the memory of him today.

In Chernivtsi, the participants had a big excursion from Lyudmila Gorova – Jewish quarters of the city, and in the evening there was a meeting with the Chief Rabbi of Chernivtsi region Mendel Glitsenstein, during which he spoke about the community, about the special month of the Jewish calendar – Elul, the month of preparation for the Day of Atonement, a month, which is very often called as the month of tshuva and performed the ceremony of blowing the shofar.

An amazing discovery for all participants was the old Jewish cemetery in Chernivtsi, with magnificent matzevah, which was introduced to us by ESJF specialist Tatyana Zhuravleva. The weather did not favor us, we worked from morning to evening, burned in the sun, fought with nettles, mosquitoes and mices. We changed each other, lifting heavy gravestones, clearing burial places, reading and translating epitaphs.

In Chernivtsi, we were lucky enough to climb under the dome of the synagogue, which was practically destroyed, the participants were able to see the restoration process, when from the ruins, thanks to the professional work of wonderful builders and restorers and the generous support of patrons, a restoration takes place, which is striking in its scale and magnificence, without losing this spirit of true antiquity.

Director of the Chernivtsi Museum of History and Culture of Bukovina Nikolai Kushnir with leaders of Maccabi-Chernivtsi introduced us to the unique pages of the history of the Chernivtsi Jewish Physical Culture and Sports Society Maccabi. The exhibition is dedicated to the 100th anniversary of the victory of the football team Maccabi Chernivtsi in the first official football championship of the region in 1920. It tells about little-known pages of sports history of Chernivtsi and Bukovyna in the period before World War II. It is based on materials from the Chernivtsi press of Austria-Hungary and the Kingdom of Romania, archival documents, as well as memories of participants of the events and eyewitnesses.

The Maccabists visited in Chernivtsi the place where the Maccabi stadium was, now there is a memorial sign “The threshold of memory” here. It was erected in memory of the tragic events in the history of Bukovina, namely the crimes and repressions against Jews, called “bloody July 1941″.

In Lviv, Olga Lidovskaya introduced the history of Maccabi-Lviv. We visited the Museum “In the footsteps of the Galician Jews” at the Lviv  “Hesed-Arye”. The museum complex, stylized as an authentic Jewish apartment, allows you to feel the entire atmosphere of this room, carried through the years. Unique exhibits in the form of various household items, books, family scrolls of Thorah preserved during the Holocaust demonstrate all the will and courage of the Jewish people of the city of Lviv.

The topic of the Holocaust was revealed to the participants by Alena Kolb. We visited the memorial to the Jewish population of Lviv and the victims of the Holocaust, which was installed on the site of the former Jewish ghetto of the Second World War. In just three years of the occupation regime, German troops managed to destroy about 100 thousand Jews and civilians in Lviv. Now the central exhibit of the memorial square is the menorah, at the bottom of which there is an inscription in Ukrainian “Remember and save in your heart”, and along the entire square there are memorial plaques with the names of the victims.

We are not able to change history, but we are able to remember and not let the others forget!

The project participants learned interesting details about the Jewish history of Lviv and Chernivtsi, got acquainted with the sights, visited memorial complexes, met Shabbat and Avdala together, and held sports events. 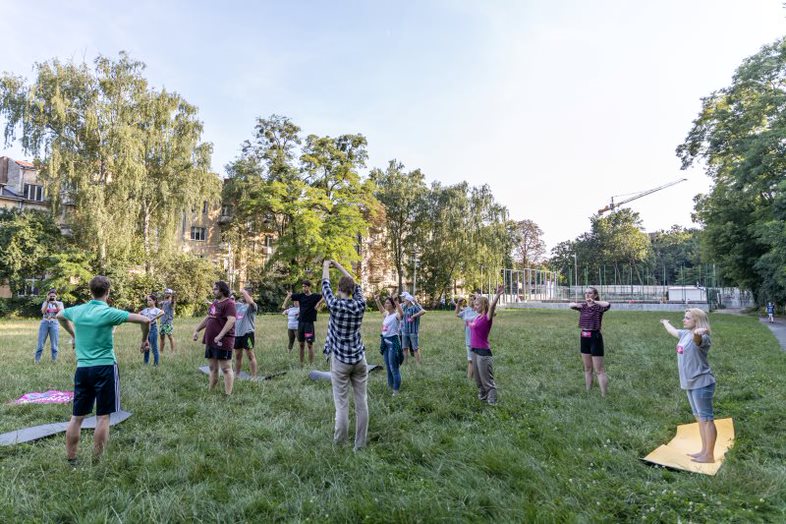 It was not an easy week, but it gave us a lot: new friends, unforgettable emotions, the most romantic sunsets, beautiful sunrises, the memory of our origins, understanding of our traditions and values. Study your history and travel. Amazing nearby, believe me! Until next time!